A downloadable game for Windows

Tall Poppy is a fun-house horror experience where you must find your wifes purse and  a way off the church property before the prankster ghost gets you!

Memory: 6 Gigs of RAM or better

Thanks for the really fun Game ! 😄

A fantastic game, this actually makes you jump, i would of loved to see some interactables on the kitchen counters in the rooms and also a reason to hide in the darkness under the stairs, all the scares are on point and it is a thrill to play.

I'm glad you enjoyed it!

Great Game Had So Much Fun! Thank you guys so much!

Some good laughs in there man! Thanks for playing!

Enjoyed this! Saw it originally on 8-BitRyan's channel, so I decided to make my own!

I included your game in my montage. Thanks again for great work!

Almost gave you a heart attack there eh! Thank's for playing it and putting it in your video!

It was a short, funny, maybe even a bit scary experience. I loved the ghosts attitude, he is trying to remain humorous while killing somebody.

"Dude, cardio is the worst!"

It's good. As someone noted, this game is very unpredictable, it even had a bit of a story!

It could be a bit more longer, i also would love to see you make more games like this. 8/10.

Glad you enjoyed it! Thanks for playing!

Humor and horror should not go so well together! This is a masterpiece!!

sorry . thanks for the warning. there was a mistake, now it is Tall poppy

Love how unpredictable this game is, you made me flinch a couple of times, but the novelty wore off towards the end and i ran past some of the jumpscares.

Thanks for giving our game a try! I'm glad we got you a few times :) And agreed, we intentionally made the game short because the gimmick gets old after you get the just of it (in most horror games to). Thanks again!

Thanks for playing! We got you a few times :P

I recorded this a couple weeks ago, but didn't have a chance to edit until now.

I liked this! I thought it was a lot of fun. My computer is getting old, so the performance wasn't that great, but I still enjoyed this a lot in spite of that!

Hope you guys go on to make more games!

The first jumpscare got me really bad! Keep up the good work! (playthrough in polish language)

Good Job, You scared me my friend.

I have to admit, I got jumpscared a few times x)

just got done playing your game and i was having a good time, thank you . there was a part were something happened and i dont know if it was a bug or glitch but the you died screen stayed on even after i revived , also recorded it ofcourse :) still good doe :

Hello! Really hope you replied to my concern few days ago instead of avoiding it. Anyways, I had fun playing the game. The jumpscares were funny and fun to experience. Also played with the physics of the things around. Hope you guys enjoyed my video! Had a lot of jumpscares which is always great for content!

You did an amazing job honestly just the audio not being picked up sucks but overall a fun game!

Thanks for playing! Super glad you had a good time with it! We were not avoiding my friend, we were looking into the audio issue! We couldn't replicate it on our end unfortunately. It seems very situational and could be a number of issues like audio drivers, outdated Streamlabs or OBS or a number of factors. Or even a fresh install of the game might of fixed something that got corrupted during a recording? Either way we are glad you still persisted and played it and enjoyed it!

Thanks for replying! I've double checked everything tho, everything's up to date plus I did reinstall the game multiple times as well so I really don't know what caused the problem. Other than that, keep up the good work! I'll be waiting for your next game and play it. :)

Hope you enjoyed my video!

Sounds good man! I'll need play testers for sure! So keep your computer for the next game (Smugglers Love, just started pre-production on it). If you want to follow progress on the game click here!

:c cant play it says FATAL ERROR at the startup

My wild guess is that it is your virus protection blocking it? I know when I test on my own machine I get the error too but I can close that window, run it again and after my virus protection recognizes it it runs.

I really enjoyed this, sometimes it can be refreshing to come across a horror comedy that actually makes me laugh. We need more like this, good balance of scares to laughs.

Yeah there were one or two things that people can nitpick but all in all it's about the entity as a whole not just wee bits here and there. Keep up the good work buds.

That's awesome! Thanks for playing and giving it a go!

I recorded the game, but unfortunately no audio was recorded. Only with this game, sadly. As one of the comments have stated, sound stops after the main menu. I can hear the audio throughout the recording session, just that OBS, and even Bandicam and Elgato recorders can't pickup the audio from the game.

Very unfortunate. Got a lot of fun scares too. I'll still try to upload it, because of the scares but it's just sad that the audio couldn't be recorded with the latest version. Older versions, probably but the new one, none.

(Edit) Even the volume mixer doesn't pick up the sound from the game but I can hear it. Bummer.

This really couldn't of been worse. 1) Character shadow shows you only made arms and one of them still in A-Pose 2) The voice acting didn't feel like they tried at all 3) This isn't Spooky's Jumpscare Mansion, you're not replicating it well either

We are sorry you didn't have a good time with our game. Thanks for giving it a try anyways though! 1) The character shadows was my bad (Chris). We have a patch coming that fixes that 2) I did the voice acting and yea, I'm no pro that's for sure haha. I tried to sound spooky but I ended up sounding goofy. Luckily he is supposed to be a goofy character anyways. 3) I have never played Spooky's Jumpscare Mansion or House of Jumpscares so I can't imitate what I never played, researched or seen before.  At the end of the day, you played it for free. We knew it is not perfect so we didn't feel good about charging for it. It's a simple small, imperfect and goofy game. That's it, that's all. We learned a lot from working on it. It's our apprenticeship game.

I just feel that the horror tag was a big misconception, cause I was more bored than scared

Very nicely done. It got one of my best scares and screams out of me.

We are glad we helped you scream at that height like never before! 22:43

the games runs well except the sound stops right before the main menu, any idea what would be causing that? thanks :)

Alright, first things first, this was oddly charming despite being a horror game! It made me think of Spooky's Jump Scare Mansion... scary but endearing!

Poppy is a very endearing antagonist, and I never felt overly threatened by him despite his obvious desire to end people's lives (and his former successes). He doesn't seem to be too malicious about it either really... he just seems to want to have some fun, which I suppose isn't surprising if his spirit is stuck in a place it doesn't want to be!

The game is mostly an exploration piece, find the item that lets you move on to the next area, but there's some really good little moments interspersed within that and the whole thing is a blast from start to end! Waiting for the first jumps to begin is the best part of the whole affair though.

So, give this a look if you're a fan of silly yet scary humour and as for you, Attainable Entertainment... keep up the awesome work! =)

Thanks for the detailed review! We are glad you enjoyed it!

What was with all the unnecessary misogyny, ridiculous stereotypes and just all around women bashing in the game? That was just a complete turn off for me.

So basically, Spooky's Church of Jump Scares.  Well done, and a lot of fun.

Also, who the hell leaves their purse in a cemetary?

Thanks for giving the game a go!

I love the humor in this game. Those scares, a couple of them really got me. I did have an issue with the opening of the drawers, that didn't take away from the game at all.

Such a fun game! Love the simple story and the overall feel of the game!

Thank you very much for the scares. You got me man, good work on the game.

Thanks for playing! We got you a few times hehe.

Also you did pick up the purse!

Thank you lol, :) Waiting for some more games from you in the future. Ill be keeping an eye out.

Thanks for giving this game a chance to entertain you!

I just saw it! thanks!

Reply
aj1stly244 days ago
I enjoyed the game because of the funny "dialogues" or notes, plus the weirdly jumpscares outta nowhere.

i made this game as part of my 3 random horror game, and its the first game in the video.

We got you a few times! I enjoyed the let's play!

I DIVORCED MY WIFE AFTER THIS!! lol jk interesting game. A few things could've been better but I enjoyed myself thoroughly. Keep it up!

Ah man no way haha! Thanks for the play-through!

Honestly one of my new favorites! I will recommend this to all! I thoroughly enjoyed the jumpscares. Once I finished screaming, I laughed til I cried. I would love to see more like this. Thank you for a creepy and hilarious game!

We are SUPER glad we were your favorite game so far! You are the best!

scared me off alot and same time gave me a good laugh xD i like the humor! very nice game!
(japanese lets play)

Thanks for playing! I'm glad you enjoyed it!

This was superb. Jumpscares worked and were all in the right places. Laughs worked and again were all set up fantastically. The animation on Tall Poppy were top notch wherever he popped up from and with the sounds to match it was a total jump and laugh fest. An indie comedy horror at it's best. Well worth a play... :)

Hi! This game really have a potencial. I like this climate and secrets of the church :).  I was sure it is a prototype or game in development, because it still have some bugs and glitches. The project have too much jumpscares and is weak optimised :( also I hate the blurry effect when running. Game is good, but should have more work ! I have enjoyed playing, thank you :)

Thanks for the input! Glad you enjoyed it!

Sometime you just gotta enjoy a few jumpscares, and this was a good way to do that.

Thanks for playing Flamez! We got you a few times! 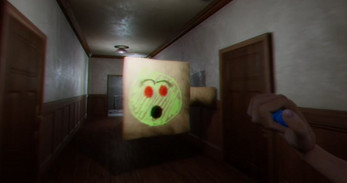 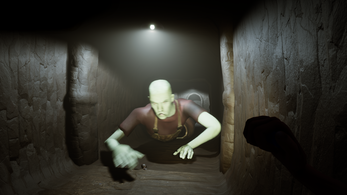 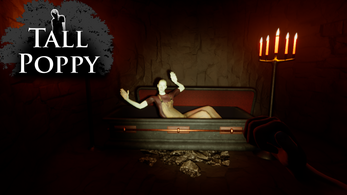 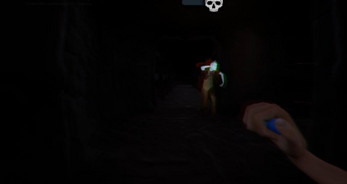